We are creating the next generation of polypeptide biomaterials that exploit two principles ubiquitous in biology: first, ordered and disordered components combine to yield materials that self-organize into bulk materials with a unique internal structure. Second, we exploited post-translational modifications (PTMs) —a class of reactions carried out on proteins after they are made inside a cell— to decorate the polypeptides with non-peptide moieties to create new biohybrid polymers.

Combining intrinsically disordered polypeptides, such as ELPs, with common structural motifs, like α-helical domains, allows us to create hierarchically ordered materials. These partially ordered polypeptides (POPs) assemble into fractal networks from soluble precursors upon heating. POPs have found applications as injectable scaffolds for tissue repair, and can be used to study how order and disorder affect protein interactions across several length scales. We are currently trying to understand how to better control aggregation, which may offer insights into protein aggregate diseases like Huntington’s. 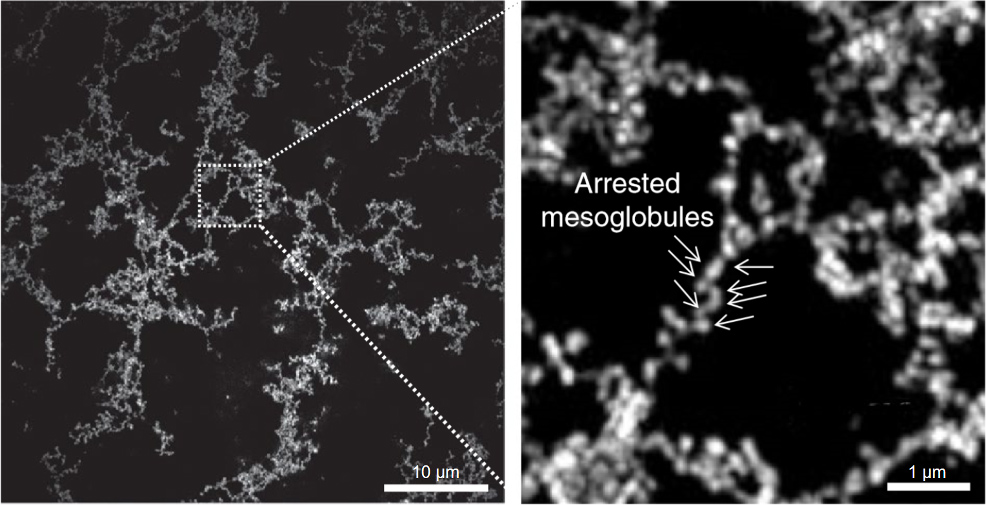 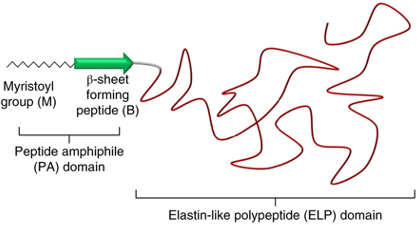 Recombinant proteins have a limited compositional repertoire, which consists of the canonical amino acids. Nature, however, has devised numerous strategies to enrich the chemical diversity of proteins by diverse post-translational modifications (PTMs).

As a proof-of-concept that an existing PTM can be reprogrammed to act on de novo substrates, we designed the fatty-acid-modified elastin-like polypeptides, or FAMEs. These proteins consist of a hydrophobic myristoyl group which is appended to the N-terminus of proteins by N-myristoyl transferase, a beta sheet forming peptide which, together with the myristoyl group forms a peptide amphiphile that directs the morphology of self-assembled proteins, and an ELP. These proteins self-assemble across multiple length scales into structures with various morphologies and material properties.

A second PTM that we have explored is the incorporation of cholesterol to create synthetic lipo-polypeptide conjugates, or the cholesterol-modified polypeptides (CHaMPs). The cholesterol PTM is carried out by the autocatalytic C-terminal domain of a Hedgehog protein. These hybrid biomaterials self-assemble into micelles. The lab has demonstrated that appending cholesterol to a biologically active, therapeutic peptide (exendin) results in the self-assembly into micelles with a potency comparable to that of current gold standard treatments.

The current focus in the lab is on developing FAMEs and CHaMPs for diverse biomedical applications such as nanoscale drug delivery vehicles and as tissue engineering scaffolds, and designing the next generation of biomaterials with other PTMs.