Sortase: a New Tool for Biotechnology and Materials Science

Fusion proteins are attractive for therapeutic protein purification because the properties of the fusion tag provide a general mechanism for purifying a protein of interest. However, removal of the purification tag from the target protein by proteolytic digestion generates a mixture that requires additional time-consuming and expensive chromatographic separation steps. We are using the Staphylococcus aureus transpeptidase sortase A to cleave ELP fusion proteins and to install small molecule moieties of interest at the cleavage site. Coupling sortase A and target proteins to ELPs enables simple purification of the fusion proteins by inverse transition cycling (ITC), a method that we have previously developed that allows purification of ELP fusion proteins by exploiting the environmentally triggered soluble-insoluble transition of ELP fusion proteins. Using ITC, the target protein can be purified from the cleavage reaction products to >95% purity by a single centrifugation step above the ELP's transition temperature. Subsequent cleavage fp the target-protein-ELp fusion and another round of ITC allows isolation of pure target. Sortase-mediated purification has been successfully applied for a variety of target proteins in two reaction formats: single-fusion (in which the enzyme and target protein are on separate ELPs) and double-fusion (in which the enzyme and target are expressed on the same ELP). The single fusion approach is also interesting because it enables purification to be combined with site specific labeling of the ELP with imaging agents, drugs, haptens or other moieties of interest. 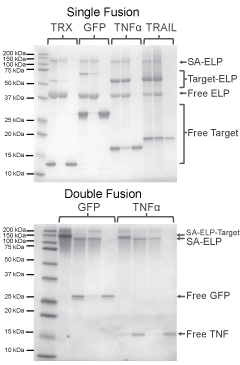